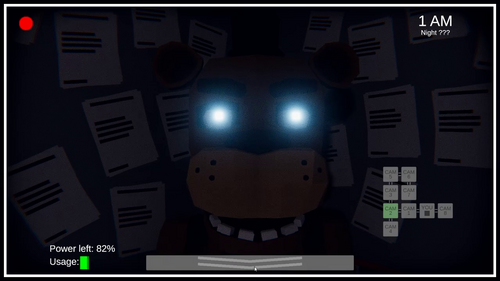 It has been a really, really long time since I last posted on the devlog here. Since I have posted here, I have been busily working on RandomMomentania and making game tutorials. I am happy to say that the tutorial making is going well and I have made several tutorials since I last posted, but that is not what I'm here to talk about.

In some of my spare time, I decided to enter ProcJam 2018 and for the jam, I decided to remake FNAF:Purgatory 1 using the Unity game engine. It is called FNAF:Final Purgatory and will be the last game in the FNAF purgatory series (hence the name).

Go check it out HERE and let me know what you think. I just pushed update 0.3.0, which has all of the features in FNAF:Purgatory 1 and 2, plus a bunch more. You may remember my failed attempt at making a third game in the series, before I started RandomMomentania. Well, I decided to take some of the resources I worked on during that time and actually make the last game in the series for you all to play.

I wanted to wait until now to make a post announcing FNAF: Final Purgatory because I wanted to wait until I at least had everything from that was in the first two games, since I otherwise it would basically be playing the same game with different graphics. I am happy to say, that FNAF:Final Purgatory has additional features and while it plays similarly to FNAF:Purgatory 2, it is different enough that it should (hopefully) be interesting to those who have played the FNAF:Purgatory 2.

So, hopefully you all will like the new game. If you have any feedback, let me know! I'd love to hear what you all think about it.

(Also, since FNAF:Final Purgatory is the last game in the series, this will likely be the last devlog here on FNAF:Purgatory 2. Huge thanks to everyone that has played, shared, and enjoyed FNAF:Purgatory 2! You guys are the best 🙂)