As some of you may know, I've been taking a break from the FNAF:Purgatory games. I lost motivation to continue working on them and nothing further has been done for a few months now (besides reading comments, watching let's plays, and other minor things). Well, I'm happy to announce I've decided on what to do with the series moving forward!

FNAF:Purgatory 2 is being worked on again! I've decided to do a complete rewrite of the entire game. This means things will be slow for awhile as I redo all of the internals. I plan to dramatically change some things going forward. Here's a taste of what I have planned:

(NOTE: all plans are subject to change)

While I cannot currently offer a time line for the game, development on the 3D assets has already started. Here's the new Freddy model: 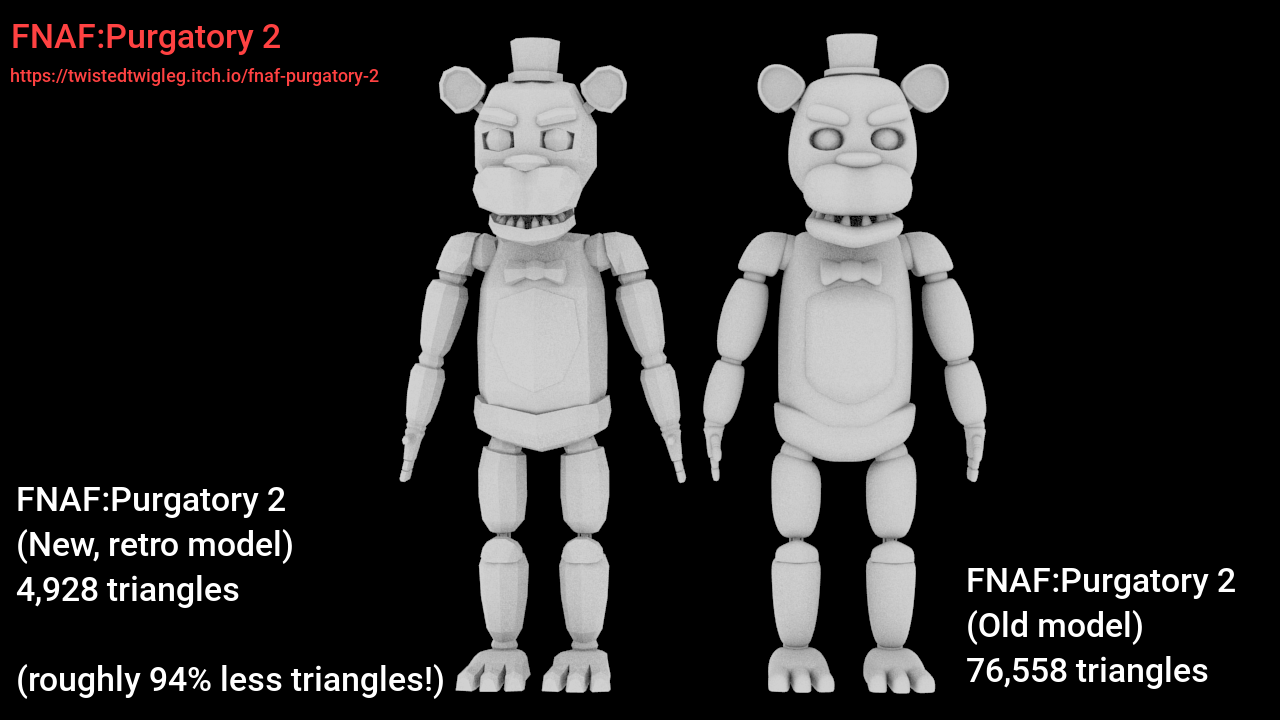 (Performance should be better just because of the lower triangle count!)

I'm hoping to get the first bare bones version out around May (at the latest). I'll try to post updates on development here every so often, probably every other week. You can also follow my Twitter, where I'll tweet the occasionally progress picture, progress in other games I'm making/made, and random stuff.

I also wanted to quickly say that the current FNAF:Purgatory 2 (known now as FNAF:Purgatory 2 legacy) will have a bug fix update coming out soon, shortly after Godot 3 stable is released. The update will not change anything major as it's mostly just a bump in Godot version (from Godot 3 Alpha 1 to Godot 3 stable). The update should increase performance and reduce bugs, so hopefully it will be more playable (currently purgatory mode has some major lag issues)

Thanks for reading, and I'll see you in a couple weeks or so!

(Also, on a mostly unrelated aside: Would you be interested in Godot tutorials on how to make a game similar to FNAF:Purgatory? Tell me in the comments below!)