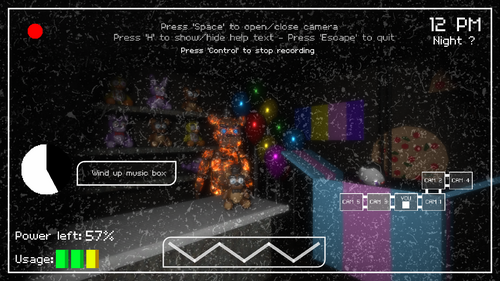 I just released the last update to FNAF:Purgatory 2 for awhile. It has the following changes:

Because the game is now at feature parity with FNAF:Purgatory, I'm counting the game in beta now, instead of alpha.

When I started working on FNAF:Purgatory for ProcJam 2016 I had no idea how massive the game would become. I made FNAF:Purgatory because I thought it'd be cool to make a FNAF fan game that was different every time you played. Over the year, FNAF:Purgatory has gotten more than two thousand downloads! That's a huge number! I never thought so many people would play my game.

After working on FNAF:Purgatory for a few months I decided to take all of the suggestions and feedback I received from everyone who played the game and use it to make a new version. I ditched the low-poly style and went for a more realistic look, added a new mode, wrote out a complete story for the game, upgraded to Godot 3 (which wasn't even in alpha at the time), and called it FNAF:Purgatory 2. Since it's release FNAF:Purgatory 2 has gotten over three hundred downloads and I've really enjoyed making it.

All of this has taken lots of time and I don't regret a bit of it. I've learned a lot about game design, animating, texturing, bug fixing, and listening to you guys and the feedback you have. All of this wealth of information has really helped my game development and I the lessons I've learned making these games are going to help my future projects too.

However, my drive for the series has started to dwindle. I've recently been working on other games and I realized that although I enjoy working on FNAF:Purgatory 2, I'd much rather work on my own original games instead. So, with that thought in mind I've decided to put FNAF:Purgatory series on the back burner for now. I haven't totally abandoned the game and I'll do my best to fix game breaking bugs, but I've decided to take a break from the series and work on new projects instead.

I don't know when I'll pick the FNAF:Purgatory series back up again. I wouldn't expect anything for a few months at least. I haven't lost interest in trying to make great games and I have no plans to stop working on games any time soon.

All of that said, I want to thank everyone that's played either game over the year. I hope you all continue to enjoy the games I create. You can follow me on Itch.IO and/or Gamejolt if you want to follow along with my game development journey and play the games I make in the future.

Thanks so much for your support over this crazy journey!