You have died, a lot. Every time, you awake in a similar place, at a similar time, to start the cycle anew...

Survive the night, lasting from 12 PM to 6 AM. Watch out though, there are animatronics waiting to stuff you into a suit! Each pizzeria layout is randomly generated, making every play through unique.

WARNING: This game contains flashing lights, and jump scares. This game may cause issues to people with Photosensitive epilepsy, or similar conditions.

Note: This is a fan game, developed in my spare time. Please support the official Five nights at Freddy's games!

I plan on trying to fix any bugs that are known or arise. If you find a bug, please let me know in the comments!

Huge thanks to everyone that has played the game!

(Thanks to Mairusu for the game play video! I hope you don't mind I added a link to it in the game page. Please let me know if you do, and I'll remove it!)

Please chose and download the proper version for your computer's OS.

The Windows and Linux downloads have two versions included, one for 32 bit computers, and another for 64 bit computers. Please run the proper version for your computer. If you are unsure, then probably the 64 bit is the one you want!

If there are any issues/bugs, please let me know!

i can play this on my chromebook

dont talk about my name

*talks about your name*

whats so wrong about your name?

This game was good! I liked the gameplay, although it could use a little tweaking. For example, the "Easy" Mode wasn't exactly..well, easy. It felt more of a "Normal" Mode, but that's not a big issue. The graphics of the animatronics were a bit wonky at times, again, a nitpick. I really did enjoy this game, though. Good work!

I know the difficulty needs tweaking, and I’ve tried to fix it in the sequel. Currently I am remaking FNAF Purgatory 2 with a art style similar to this game and I plan on doing extensive play testing to ensure the game is a little more balanced. You can play FNAF Purgatory 2 here (though it is the legacy version. See the devlog for more information)

His channel is Just King Boyz,and he has been helping me since i 1st created my own channel https://www.youtube.com/channel/UCpI3hK0C6ai-r8u72YisADw

Sub,Like or View his video because he has been helping me a lot,and sometimes we play and record together :D

Thanks to him i got more Views and Subs,you can find my channel here https://www.youtube.com/channel/UCmAL3kQty32pb-h8qf74fdw

This game is great,but it makes the game harder because the Animatronics move so fast that i even have to close the door for like 5 or 6 seconds later XD

Yeah, FNAF:Purgatory has some difficult gameplay moments due to how the code is set up. I've (hopefully) fixed most of the animatronic behavior in the sequel: FNAF:Purgatory 2

i've got an idea for the game! you know how its fnaf:PUGATORY you could do a new game/mod for the game fnaf:hell the change for the game would be heaven harder and change the look of the place and the animatronic (or any idea you have for this) you could ad a new animatronic some kind of secret

Thanks for the ideas! I have some cool new stuff in store for FNAF:Purgatory version two! Version two is going to be similar to version one, with some major changes and additions as well, and hopefully it'll be scarier too!

Dunno why, but I really like the assets in this game. Especially Foxy. That kind of low poly look is so hard for me to pull off. I hope when you finish updating this game, (which I can't wait for) I hope you'll make a new FNAF Purgatory but free roam, or something similar.

The new version of FNAF Purgatory is coming out soon! The graphics are going to be overhauled to have a more realistic look, but I'm glad you like the low poly look :D Low poly modeling is very fun, but difficult to pull off!

I currently have no plans to make a free roam version of FNAF Purgatory, though I might look into adding a free roam mode or something similar, after version two is released.

(Also, I deleted the second comment, since it was a duplicate)

please add jumpscares. all it shows is the game over screen.

ps. i think these animatronics are scaryer than the actual game

There should be jump scares, I added them in/around version 0.2.0. Maybe you found a bug? Which version were you playing?

PS: Thanks! I tried a low poly look, and I think it turned out pretty good.

Which version of FNAF: Purgatory?

3:About how many jumpscares did you go through making this game, and are you immune to them now?

I watched the original jump scares probably two dozen times. As far as being immune, I'm still just as easily jumpscared as before I started development :)

it does not work. it wont open.

which version? Windows, Linux, or Mac?

The very first 1.0.0 version I released had a bug that prevented it from running. If you downloaded the game yesterday (the 11th) then it might already be fixed, so please redownload and try again if you downloaded yesterday.

I can confirm that the current download for Windows and for Linux open and run. (at least on my computer)

Please try downloading again and see if that solves the problem. 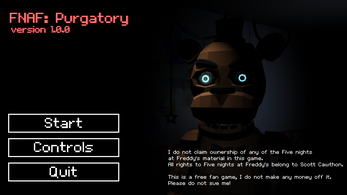 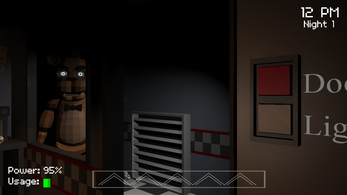 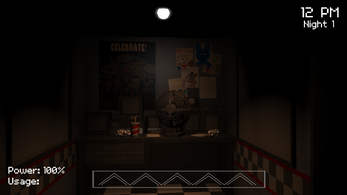